In the beginning there was rock and it was good

No one is sure where these magical notes came from, but with them came the ability for mankind to communicate. Guitar riffs and the beating of drums eventually evolved into a true form of communication and ushered in the age of rock.

Tribes formed from a mutual appreciation and gave praise to the Gods of rock. A pantheon of beings the Wordsmith priests had created in an attempt to explain the mysteries of rock. Mankind eventually went to war over contradicting theologies. Instruments became sharpened and battle songs became more fierce. Then one morning sparks flew from a young tribe of guitarists. Their ability to shred was so powerful that lightning struck from each and every note. The approaching army stood in awe, opting to surrender and learn the ways of this tribe. Little did they know on that fateful day, that small tribe created metal. 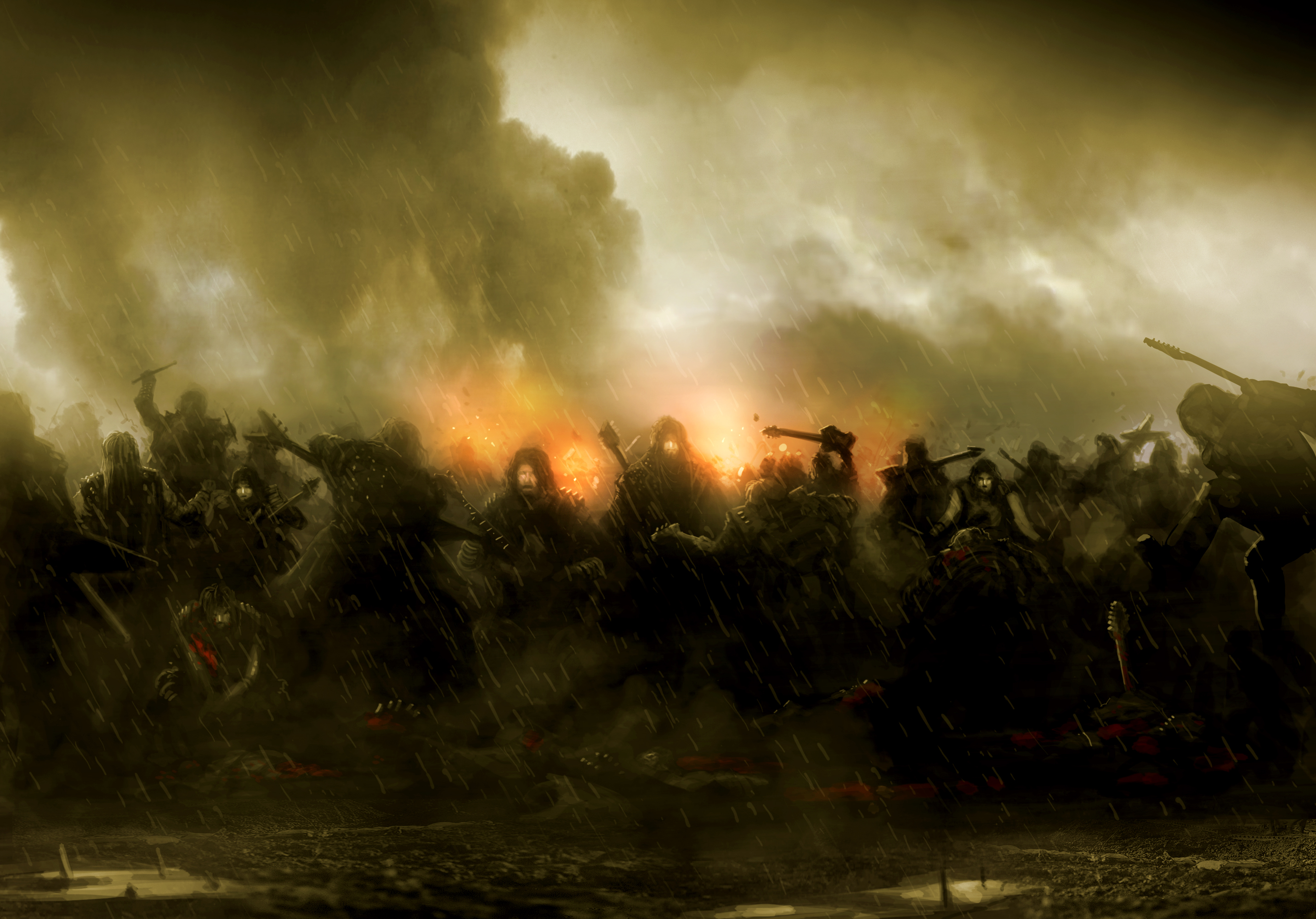 The wars stopped shortly after that day. Although a few stuck to the old ways of rock, many joined the new ways of metal. Power houses were set up to harness the lightning chords and in many communities a rapid industrial revolution started. The majority of the continent was still wild but these communities strived. Over the next few centuries the most mainstream metalheads started to take the use of metal for granted. Although the high priests of rock and symphonic maidens tried to warn them, they went on unaware of what was corrupting the metal.

Now is a time of unease. A radical tribe from a small island to the west is invading with what they call punk. This happens as a plague is sweeping the land turning once devout metalheads into emo monstrosities.

You live in the city of Corroded Scorn

It's busy and corrupt to its core,

making it the perfect place for your band to make a name for yourself.

METAL OVERTÜRE is a roleplaying game inspired by heavy metal. Specifically British Steel bands (such as Black Sabbath, Iron Maiden and Judas Priest). In it you'll be shattering ear drums with powerful solos, taking down beasts the size of buildings and overall turn things up to eleven. You'll also be dealing with more grounded issues that sparked the birth of metal such as themes of the class divide, workers unions and struggling to put food on your table during times of unease.

The game shouldn't be all doom and gloom though, as the gods of metal are watching and you wouldn't want them to be disapointed. So kick over an amp, headbutt a guard through a wall and go cause some mayhem.

Forged in the Dark

When designing METAL OVERTÜRE I wanted a rule set that was easy to learn, simple to use during play but also open enough so that people didn't feel like their actions were ever restricted. This is why METAL OVERTÜRE is a Forged in the Dark game, meaning it's a hack of John Harpers' Blades in the Dark. An excellent game about scoundrels doing what they must to survive.

Blades in the Dark was the perfect fit for METAL OVERTÜRE as although you'll be fighting for your life in a Battle of the Bands. The majority of the time you'll be taking on less than reputable scores just to keep a roof over your head. As Blades in the Dark relies heavily on what players make of the fiction it means how over the top metal a character can be is restricted only by a players imagination.

The Blades in Dark SRD is required to play METAL OVERTÜRE and you can get it free from bladesinthedark.com.

Get familar with the Blades in the Dark SRD

Read the quick-start and starting scenario

Make a copy of the playtest sheets

Play the game and most importantly have fun

Come chat with other metalheads and share some feedback